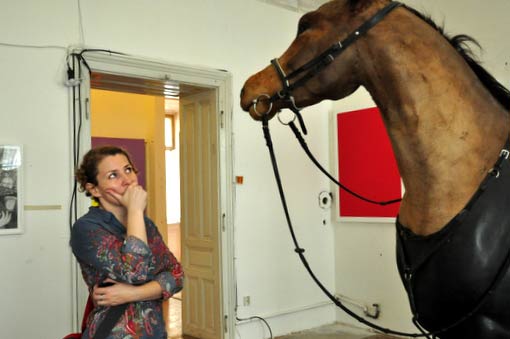 During my visit in Prague, in between beers, bridges and beautiful doll buildings, my friend and me we visited AMoYa to see some works of young czech artists.

I was very impressed by the works of David Cherny, provocative and ironic chzech sculptor, whose crawling babies we also saw climbing on Zizkov Television Tower. The guns pointing on each other and a giant athlete, hanging on the rings are also his works.

While I was stairing at the «Shark», my friend Karin, who knew his work before told me about his very controvercial project , which was placed in European parlament during the Czech presidency and caused a great offence to almost all the countries :). Czech minister even apologized for that.