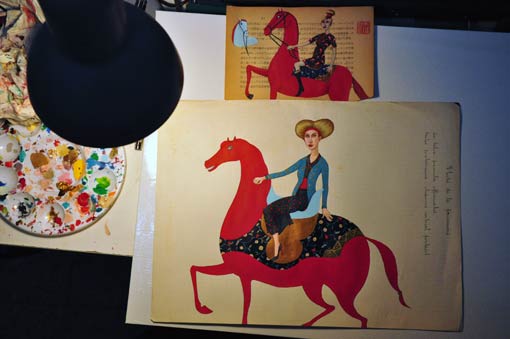 People very rarely ask me «what this work of yours means?». It’s a good thing, because I don’t know what the work of mine they liked means for them. Often I have no idea, what it means even for myself. I just like to follow the process of creation, without knowing in advance what turns will it take and where will it stop… It can start really from anything and to go anywhere. I’ll show you.


Once I read my friends Facebook status: «Russian art is not only Malevich and Kandinsky». «Hm…» — I thought to myself. — «What would I introduce to non-Russians as a Russian art? It is so beautiful, interesting and diversive.»

Then I tried to figure out, what are my favorite Russian paintings, but my subconscious was blocked with art works we had in grammar book of our Soviet school. For example, a picture by Fyodor Reshetnikov: Another «F»?

I still remember the school essay I wrote about it…

Or another one (take one random Russian and he for sure will recognize it): 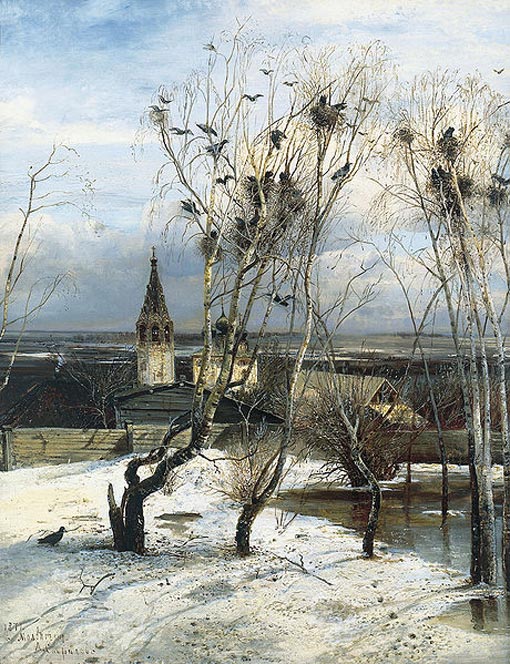 Savrasov. The Rooks Have Come Back

I made another effort to remember something I really like, and a huge scarlet horse with a naked boy came into my mind. When I saw it for the first time in my life I was maybe 12, so all these bathing horses and their strong undressed riders made a big impression on me. 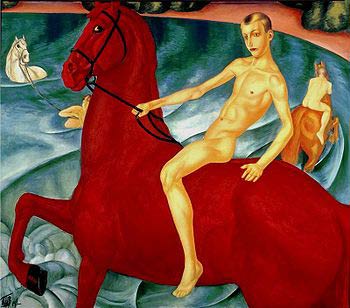 It’s a cool picture, really. And it was created exactly 100 years ago, at 1912. Interesting coincidence!
I decided to make an homage to this work and painted this:

«Strange,» — I thought to myself. «Why does it look so Asian?»
Then I’ve noticed an old photo-album I bought on Jaffa flea-market a week ago. 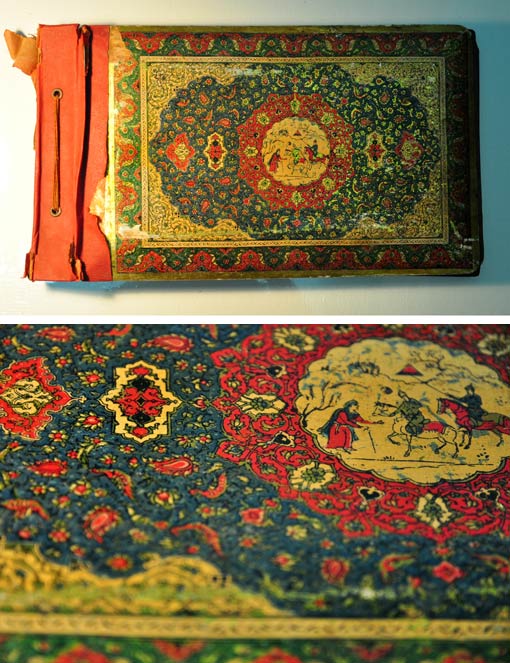 We agreed on 30, and now this amazing cheap treasure is in my studio, and it is quietly inspiring me with it’s green-red-yellow shabby patterns. Look, it even has a tiny red horse in the middle!

Then I decided to paint my Red Horse Rider again, but this time in bigger size. I don’t know why.
I looked for a decent piece of paper, but everything I had was too small… When I was about to give this idea up, I suddenly found an album which I brought from another flea market, in Brussels. I was there with my friend Karin, but we got to the market too late, when they were closing. We were about to leave when I noticed a big heap of old objects in the middle. Some of these objects were half-broken. I lifted a big brown album. It was a school album of a very neat girl whose name was H.SCHMITT, dated 1932. It was probably expensive? I looked for a seller, but nobody was selling it. People just took whatever they liked and went away. 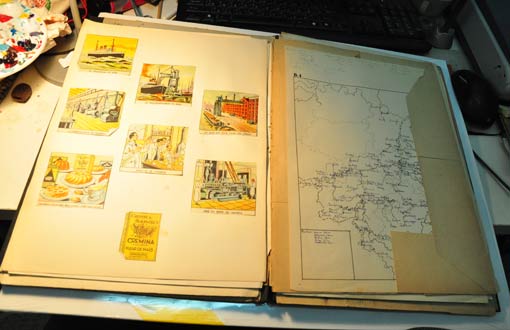 Suddenly, I felt so sad. What is the purpose of being such a good girl, such a diligent student, if finally all your belongings will be not more but a pitiful pile of old nonsense? Not even good enough to be sold at a flea market. I gently stroked my brown album.

it had some nice art exercises: 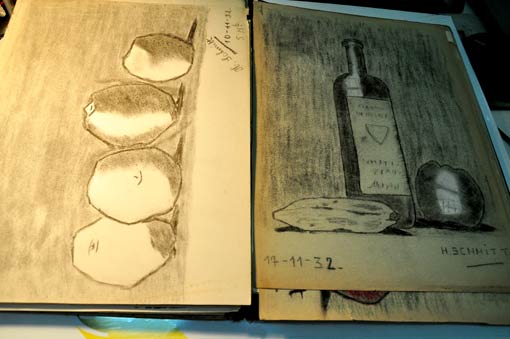 a stylisation of leaves: 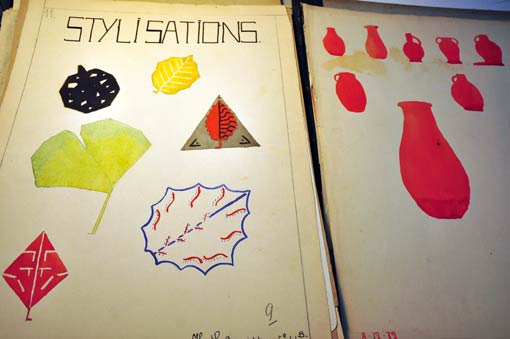 research about mills and grains, with schemes, photos and even samples of rice from 1932: 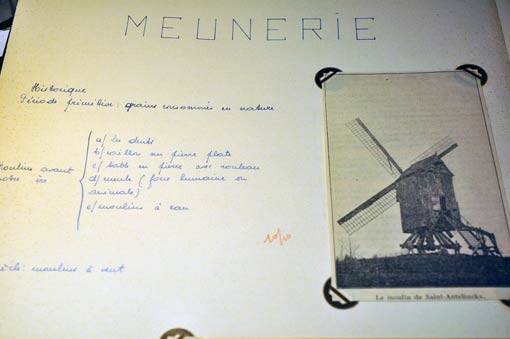 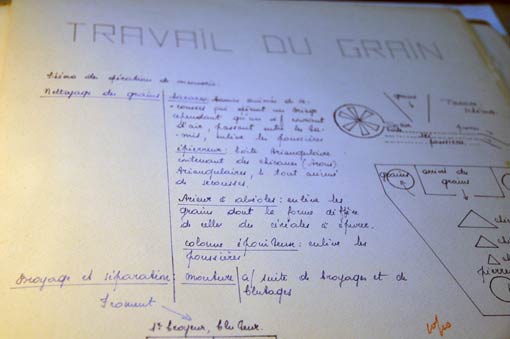 of course, a herbarium: 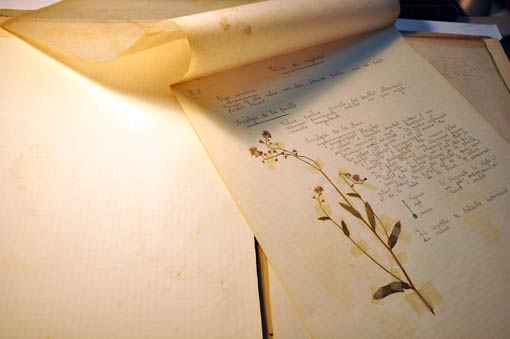 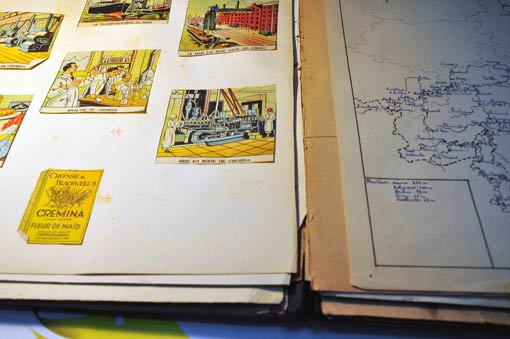 Hey, H.Schmitt of 5th grade! Loved your works! Good girl! Lets be friends and do something together! Good you saved some blank paper for me. Thank you.

So, back to my studio. After I found my paper, I also googled for some Persian miniature paintings. There were horses, too! And they were absolutely magnificent… 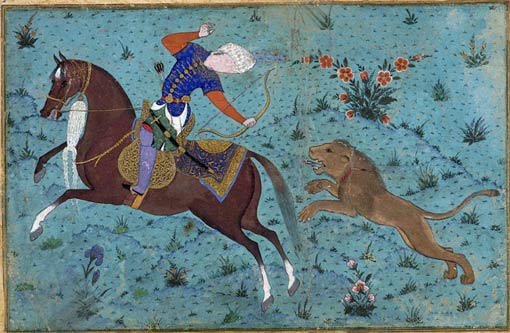 Just before I stamped my work, I’ve decided that something was missing. But what? 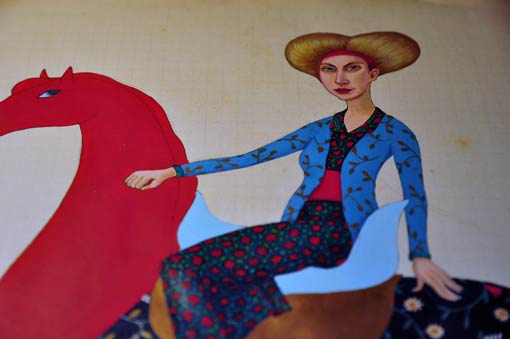 So I realized, that I wanted this independent, self-reliant woman to be… me. But it didn’t look like me at all. No problem, I should give her my symbol. But what would it be? I looked around and saw my favorite satchel: 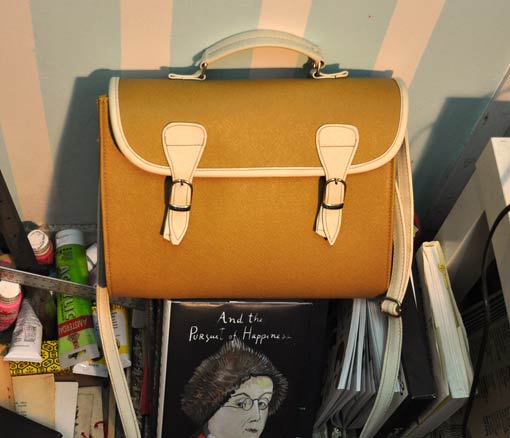 When everything was almost finished — oh, no!!! — by accident I dropped a brush on the painting and made an ugly blotch! Undo! Undo! Ctrl+Z! How many times I was looking for this magical button in the real life! But since there is no such a button yet, I painted a dog instead of this blotch.

I have no idea, why a dog. Maybe because of our annoying teenager dog Tobik, or maybe because my friend Tania from Kiev has recently shown me photos of her cute pug Stepan on her phone. I was amuzed by discrepancy between his aristocratic looks and his peasant name.

So, my finished work: 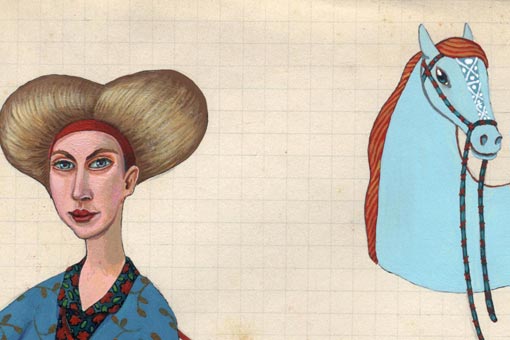 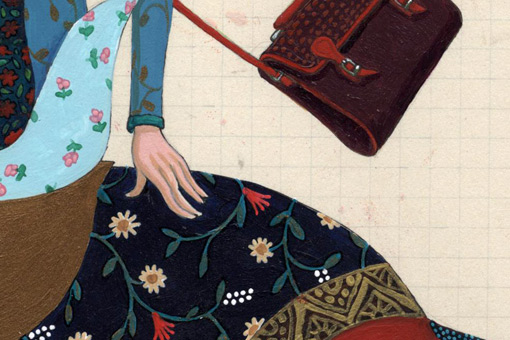 I hope, is not rolling in his grave :)
Happy 100 jubilee, bathing Red Horse!